This Blog Has Moved

Thanks for stopping by!

I've stopped publishing to this blog, but you can find it carried on here:

Thanks to all my past and improbable future readers at this blog.

Josh
Posted by Unknown at Tuesday, January 07, 2014 No comments:

A phenomenal accomplishment in filmmaking supported by an excellent cast, a strong script and bombastic soundtrack. In sum: the theater experience of the year. See it. 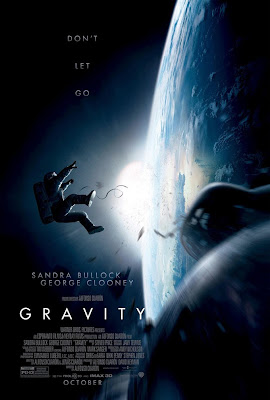 I've been on hiatus for a while, which has been disappointing because I love writing these things. I'm planning to overhaul my blog once I'm free from Uni commitments, but in the meantime... I've been watching lots of stuff! I'll do my best to pump out a few mini-reviews in the coming days as my essay deadlines loom and I need to start digesting all this information into something academically presentable, but in the meantime... Here's Gravity.

With all the buzz around this film I just couldn't resist dashing out to the theater last week to see it. It's almost like a perfect conclusion to my sort-of series about the Hollywood system: When big-budget movies go right. I don't really have much more to say about that, except that it does happen! There are creative people working in the industry - not every film that achieves blockbuster status is cookie cutter. Gravity is a totally unique film to experience.

A beautiful looking, fantastically written, acted and paced, all-round excellent film. Mud is a shining example of the upside to the bigger-is-better culture of Hollywood, 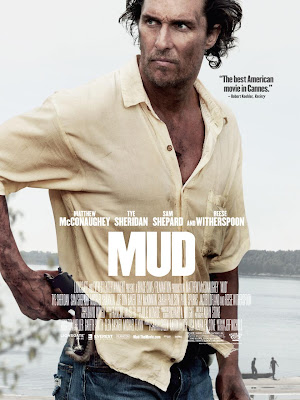 In my last post I spent a good deal of time dwelling on the problems with Hollywood's obsession with bigger and yet bigger pictures, built for the mass market. To be clear; I enjoyed my time in the cinema watching Man of Steel, and a good many other blockbusters of its ilk. Some of them are abominations though. I don't review them often, because I don't often bother to see them.

But here I want to focus on one of the upshots of modern Hollywood, and especially one that has come about with the recent proliferation of affordable digital film-making equipment. Mud is a relatively low-budget film - $10 million is pittance compared to $200 million superhero films - but it has all the professional production quality and artistic finesse of the best of those films.

Mud is directed by Jeff Nichols (who also directed Take Shelter, which I love). It's about two boys who live in the Arkansas delta - Ellis and Neckbone, born and raised on the river. Exploring the swampland, the boys stumble across an old boat suspended in a tree, and even stranger, a grown man living in it. The man's name is Mud. He has crosses in his footprints, and a snake tattooed upon his arm. The only things he values are his shirt, his gun, and the girl he's waiting for; Juniper. As they befriend Mud and begin to uncover his past, the boys are also being boys; living and learning as they throw themselves headlong at life.

Bombastic and ambitious, Man Of Steel creatively re imagines the Superman mythos for the modern audience. It lacks in acting, pacing and story, but makes up for it in sheer spectacle. 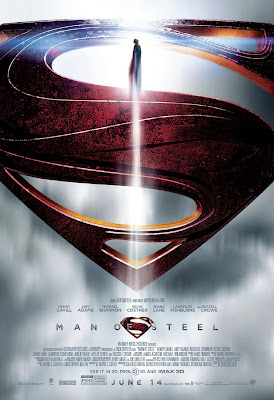 In response to the massive success of Marvel's Avengers franchise, DC Entertainment and Warner Bros. have unveiled their plans to create a Justice League film, featuring iconic comic book characters such as Superman and Batman.

While Batman has found great success on film recently, Christopher Nolan's The Dark Knight series was heavily grounded in reality, delving deep into the psychology of its central figure. Not the stuff of science-fantasy franchise building. But in the wake of Batman's success, Nolan was brought on board (along with Dark Knight writer David Goyer) to develop Superman into a story that could not only resonate with today's audience, but could also form the foundation for a whole series of DC-universe blockbusters that could intersect and expand.

The two super-powers of the comic book film franchising realm are clashing, and in the glorious carnage, we the audience are about to reap the benefits. Or endure the consequences. It's hard to say, really, whether this kind of film making is good for the industry or not.

"New" Hollywood tactics - of throwing as much money as possible at a film, and having it appeal to the widest audience possible - have been around for well over 30 years now. Has anything changed? Today's industry, it seems, is exacerbating the trend started by Star Wars and Jaws, with bigger budgets, bigger marketing, stronger branding, deeper pockets to be emptied and refilled. What do we call films like The Avengers, and the Justice League project? Mega-blockbusters? AAAA movies?

Pretty and romantic and sweet and sad... but I couldn't get into this love story. 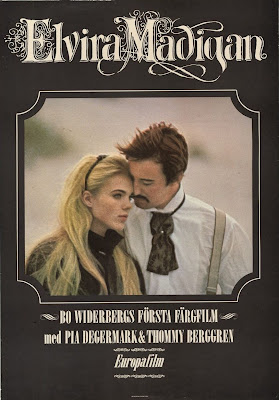 Elvira Madigan tells the (true) tragic story of Danish tightrope-walker Hedvig Jensen (stage name Elvira Madigan), and her lover Sixten Sparre; deserter of the Danish army. The two run away together, and find themselves penniless and starving, but happy in love as they make their way through the beautiful Danish countryside, evading their pursuers, making friends and enemies along the way.

The film opens with the two of them together, sitting in a field. He has a razor and mirror with him, and shaves off his beard in an attempt to disguise himself, as they are planning to run away together. This takes a while, as he pauses halfway through to finish making love, but once relieved of his facial hair and libido they set off.

Inexplicably, though she has a more distinctive look and a higher public profile, they make no attempt to change her appearance. Plus, after spending the entire scene pulling the gold lining off his military coat so that it looks more like civilian clothing, he inexplicably hangs it around a scarecrow's shoulders, in a most conspicuous fashion. This is the first of many careless mistakes the two make.

This, I suppose, is the epitomy of being carefree in love.

Star Trek Into Darkness is a perfect continuation of a supremely well-executed reboot. It draws on the old lore, builds on the new, with a balance that will likely please both the casual audience and the hardcore. 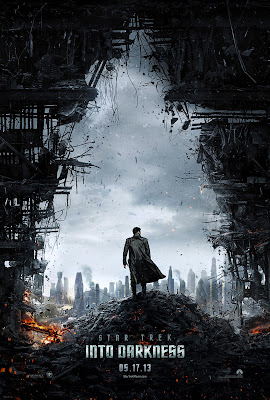 Star Trek Into Darkness takes the solid foundation of the first film, and builds on it fantastically. The aesthetic of 2009's Star Trek remains with the action scenes, the creatively envisioned future gadgetry  and even the infamous lens flare. Yes, the first film caught a bit of flak for the incessant lights that seemed dialed up to 11, but this film tones it down only a touch. It's no longer blinding, but it's familiar and consistent with the feel of the first film. Good compromise.

J.J. Abrams 2009 effort to reboot one of sci-fi geekdom's most well known franchises was perhaps the most brilliantly executed in reboot history. Recasting new faces as iconic characters, Kirk (Chris Pine) and Spock (Zachary Quinto), the trick they pulled in that film was to make the new series occur in a parallel universe; one affected by time travel. Different from the original series, but with the same characters and settings (well, minus Vulcan).

What made it really work was the presence of old Spock, played by the original actor, Leonard Nimoy. Nimoy's presence in the film served both to tie it in with the old series; acknowledging its existence, and also allowed the new series to take it's own direction with this slightly altered timeline. It was like the old franchise was giving its blessing that the new one be made, and be made differently. And how different it is! Unlike previous iterations, Star Trek was an action/adventure blockbuster, and a good one at that.

In Marvels ongoing quest for world domination via massive interconnected blockbuster franchises, Iron Man 3 is utterly expected, but full of surprises. A step down from The Avengers, but a big step up from Iron Man 2. 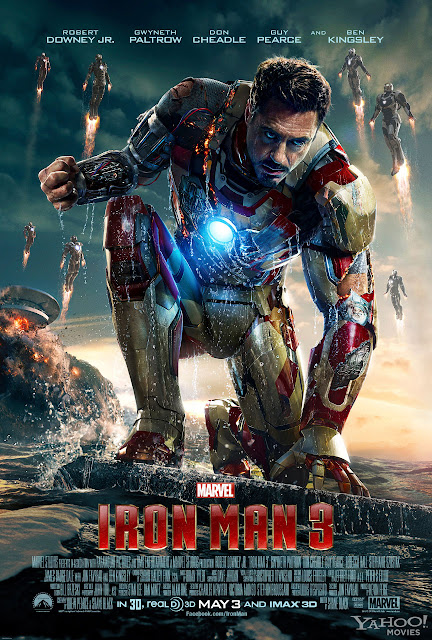 Disney/Marvel's Iron Man film franchise has never looked more cartoonish than in the closing credits of Iron Man 3. Unlike the previous films, which featured first line drawings, then comic-strip style illustrations splashing across the screen to the music, this film uses live action snippets from the film, and from the gag reel (I believe). Despite the photo-realism, the mad-dash editing and brisk musical beat give it the feel, more than ever, of a Saturday morning cartoon title sequence.

It's a fine and fitting credit sequence, but I mention it because it's representative of where the franchise has been heading. Iron Man, way back in 2008 took a fairly realistic approach to the superhero film. It featured topical themes, and only barely stretched the boundaries of realistic technology. It was unique at the time. There have been a slew of more recent films that have connected with the original Iron Man, using that film's established credibility, and expanding its universe to include a large array of colourful characters who have been referenced and cameoed to no end in this ambitious project. And with each little step, this universe has grown further and further from our own; straining credibility both in the science-fiction aspects (which might as well be labelled fantasy at this stage), and with the fundamental principles of reality, such as the fact that a mere mortal cannot survive (let alone continue to fight) after a certain amount of force is applied to the body. All this is to say that Iron Man 3 continues Marvel's franchise-wide trend of turning this world that looks like ours into their own thoroughly cartoonish one.